Show / Hide textgame progress. Approach the keypad. Either enter a code from the end of The Academy Part One or look around (left of screen hotspot) to talk to Maria. You only get three attempts to enter the code incorrectly before a security guard tells you to leave. ENDING 1

Scene 2: Meet Didi
Didi will come to tell you that Principal Valentine and Bridgette are waiting for you in the Media Department. You can raise her lust level by asking her how she is. This scene is shorter if you have been with Maria and are running late.

Scene 4A: Principal Valentine in the storeroom
Conversation about your report with the Principal. She asks about Bridgette, if you give offensive or inappropriate responses she will end the conversation abruptly and tell you that she wants a progress update at 3pm.
If you keep the conversation going she will suggest using the gym for a workout and also ask you to remind Sebastian the Groundskeeper that he needs to mow the lawns.
This is important for achievements with Lola later in the game.
You can also increase the Principal's lust level which is useful but not critical for any acheivements with the Principal.

Scene 4B: Exploring the storeroom
Look around the storeroom. The most important thing to find is the notepad with three codes written on it.
Make a note of code three. You will need it in the next scene. Once you have left the storeroom you can't go back.

Scene 5: Office
Go back to the office to unlock CCTV feed three.
You can then work on your report to take the clock to 10:30am. After that you can leave and go to the studio session, or stay a little longer and watch Megan naked in the girls locker room.

Scene 6A: Studio session
After an introduction from Bridgette, you will get to take all the girl's portrait shots with dialogue options to raise lust level.
Compliment whichever girls you are aiming for later achievements with throughout this scene.
There are two main directions to take when working with the girls in the studio. You can either focus on working with Holly, Lola, Amy and Laura. Or you can aim for to keep Annie, Genevieve and Isabella in the studio with you.

Just before you take the portrait shots, if you choose the "Face shots" dialogue option Annie will go first.
Otherwise Lola will go first. Whoever goes first will get an increased lust level.

The girls will then take your photograph. Whoever you choose to go first at this point will get a small increase in their lust level so choose wisely.

Scene 6B: Studio Session
To optimise your chances with Holly and Lola, you need to talk with them when Bridgette has left.
Then reject Annie's idea and then stop Annie from hitting Holly when they fight.
Annie will leave taking Genevieve and Isabella with her.

Scene 6C: Studio session - Working with Holly, Lola, Amy and Laura.
Working in the studio will earn you an invite to join the girls in the gym after lunch.
You will also get opportunities to increase each girl's lust levels.

Scene 6D: Studio session - Working with Annie - Clothed.
Genevieve and Isabella will leave you alone in the studio with Annie.
Continue letting her pose for you.
If Annie keeps her clothes on you can continue taking photographs until Bridgette come back end the session ends.
Bridgette will thank you and suggest you go to get some lunch.
This outcome will allow the option to continue with Annie later in the day

Scene 6E: Studio session - Working with Annie - Naked.
After Genevieve and Isabella have left you continue taking photographs of Annie.
If her lust is high enough she will agree to take off her clothes.
The Principal will interrupt along with Bridgette.
If you are also naked, you will get fired. (ENDING 3)
If only Annie is naked the Principal will remind you about the 3pm meeting.
This outcome will NOT allow the option to continue with Annie later in the day but WILL unlock the extended meeting scene with the Principal.

Scene 7: Canteen
If you worked with Holly, Lola, Amy and Laura then you should get to talk to them in the canteen and invite you to the gym for a workout.
Holly will stop to talk with you as well. If her lust level is high enough she will suggest meeting up later on in the afternoon.

Scene 8: Leaving the canteen
If you worked with Annie, turn left as you leave the canteen and find her at the end of the corridor.
She will suggest continuing your studio session at 3pm.

Scene 9: Conversation with Sebastian
Sebastian will be outside the gym, you can ignore him, but this is a chance to pass on that message about the lawns from the Principal.
If the option to tell him doesn't appear it's because you didn't get the message from the Principal in the first place.
Not passing on the message whether by choice or not can effect what can happen in the shower.

Scene 10: Working out in the gym
Whoever you choose as you partner will get a boost in lust levels. You will need to raise Lola's lust level to get her to visit you in the shower after your workout. Massage her injured thigh but don't go too far and all the girls will complete their workout with you.

Scene 12: Office
If you didn't get a gym invite, left the shower or didn't meet Annie? Your only option is to go back to your office to work on your report and check the CCTV feeds.
You will get to see Genevieve and Isabella having sex in the shower and locker room though.
When the clock gets to 3pm you will get a visit from either Bridgette or Annie.

Scene 14: Meeting with Principal Valentine
Get to the meeting at 3pm and Didi will direct you through to the Principal's office.
There is a check on your report progress and the conversation will reference the gym or Annie if either of those events have occured.
It's important to keep the conversation going and not to annoy Ms Valentine.
NOTE: When you leave the office you will have the option to pick up the storeroom key from Didi'd desk.

Scene 16: Holly
If you were invited to meet by Holly after lunch during Scene 7 then she will meet you in the corridor as you return to your office.
She talks to you outside the studio. When she asks whether you can go somewhere more private you can reject her and continue or...
Holly variable 1:
If you didn't pick up the key to the storeroom then you can go to your office to talk. You will get interrupted by Bridgette and Holly will have to leave.
If Bridgette's lust level is high enoughse will stay to talk with you. (Goes to scene 18B) Holly variable 2:
If you picked up the key then you can go to the storeroom to talk. (Watch out for the screen hotspot rather than dialogue options here) You will be able to continue to scene 17.

Scene 18A: Office
Return to your office to work on your report.

Scene 18C: Office - Continued
Once you are back on your own in your office you can continue to work on your report.

Scene 20: Heading to the exit
From 4pm onwards you can leave work. As you leave you may meet Laura and her sister Alicia. This scene makes has no effect on you overall game performance but does fulfill achievement number 9.

Scene 21: Getting your code from Jodie
As you are leaving you talk to Jodie and get your exit code for the day. If you have the storeroom key you can give it to Jodie and she will flirt with you a little. This fulfills acheivement number 8.

NOTE: The code you get is based on your influence level at the end of the game.
The code will set your starting influence and lust levels at the start of part three.
Some of the codes will also unlock bonus scenes. 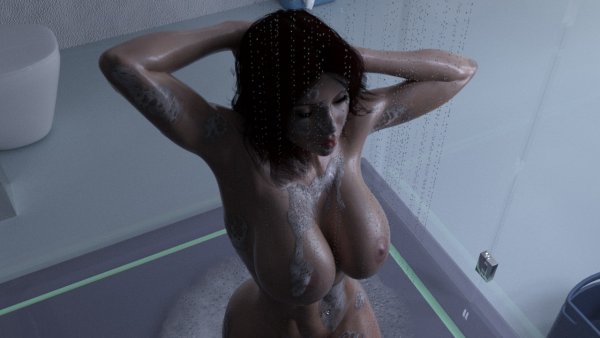