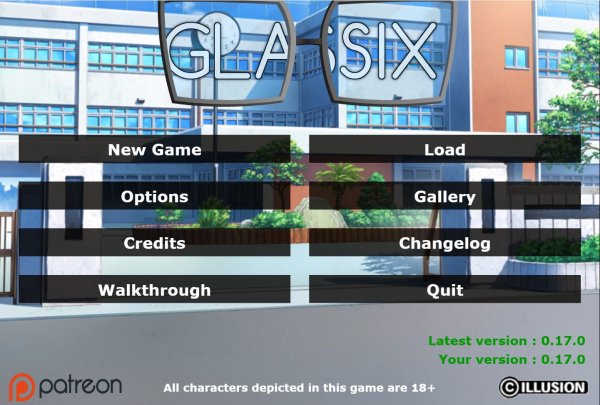 Description:
Glassix is a project aiming to give you another way to enjoy custom made games. Glassix will focus on the story to let you enjoy a more classic visual novel game with point & click elements.

* 11 girls with unique kinks
* 11 extra girls with limited interaction which will be fully playable later
* Roam in the city and interact with the girls
* 7 districts to explore, more than 150 locations !
* 4 obedience level to trigger and increase the girls willingness to perform pervert act with you
* City map interface to easily find your way
* Affection and obedience management. You’ll need to raise both for the girl to act as you want.
* A lot of features planned such as : money, part time job, school grades, romantic dating events with girls, choose an official girlfriend and more !
* And of course, a lot more H stuff will be added in each new version.

Version 0.40.1
Changelog
Added Marylin sexy casual, sexy work and sexy underwear outfits
Fixed Marylin sexy clothing issues
Reduced coffee stamina regain and increased its cost in the hospital shop to balance it (Thanks TheJohn!)
Classroom orgy event now increases suspicion
English translation corrected by Spectre Rose (Huge thanks to him!)
French translation updated by CarpeNoctem
Fixed bug preventing stamina to be regained if sleeping after midnight (Thanks Squark!)
Fixed many missing and incorrect translated strings in gallery and events list (Thanks Squark!)
Fixed bug in event where you buy Marylin second suit which prevented the event to repeat if you choose the "Nevermind" option (Thanks CarpeNoctem!)
Removed popup when clicking a choice
So among the changes, Marylin sexy outfits have been readded to the game. All sex related images are available.
A few players reported the coffee item to be OP so I've lowered the stamina regain and increased its cost in the hospital to balance it a little.
Finally, there has been a huge english translation correction made by Spectre Rose which I included in this patch which fixes a lot textual issues in the game, mainly in the global events. A big thanks to him.


0.37.0
General
Added sexy outfits images for Aiko, Saiko, Rin, Naomi and Ayumi
Added bad endings for Eimi and Yae
Added good endings for Kana, Utako and Yatsumi
Sex
Added new options for the duo commands of the twins
Added anal options (commands, toilets, bath and sleep) for the twins
Bug
Fixed wrong tooltip when hovering top right girls icon during events (Thanks Salking!)
Fixed typo about the PE starting day in tutorial event (Thanks Salking!)
Fixed Anael meeting triggering too early (Thanks Salking!)
Fixed bug allowing access to Eastisde conbini job outside of schedule (Thanks Salking!)
Switched a few waypoint positions in some locations (Beach C, Bakery Street and Small shop) to match the city map (Thanks Spectre!)
Fixed bug allowing skills to get above 100 (Thanks Balinn!)
Fixed wrong locations in airport city map (Thanks Balinn!)
Lily and Anael can no longer introduce the nun at 80 suspicion (Thanks Spectre!)
Added missing standing sex in doll mode for Kristina and Emiri (Thanks Viewer!)
Doubled the price of all donations to match the sexen cost for suspicion reduction (Thanks Viewer!)
Fixed Hikari avatar when wearing sexy underwear under sexy work outfit (Thanks Alex2011!)
Fixed bug during dates at the classy restaurant in the museum when choosing the bitter dish (Thanks Vitamin433!)
Fixed bug with city map legends
Fixed sex shop position on city map in Northside

Bug Corrections
Solved bugs at the end of the museum date (Thanks ic95!)
Added some missing images for the married girls event

Changelog Version 0.27.1
General
Added girlfriend option when affection reaches 200
Added choice during night to sleep with girlfriend
Suspicion feature added
More personalized texts for the Aquatic Park date
More job H-scenes for the cheerleader training and the Aquatic Park lifeguard (threesome and foursome)
Utako's wedding. This event completely change the way you have to handle Utako, because you have now less than 5 weeks to raise her to level 4 before she gets married. After the wedding, obedience events won't be possible anymore: to get her, don't forget to go at this wedding.
Utako's emancipation: if you succeed the wedding event and you bring her to 160 Affection and Obedience, you can date her
New item: vibrator. You can give it to a girl and activate it in certain detailed circumstances to have a bonus scene. Aiko and Saiko's scenes are ready. Probably more will be ready next month.
Town
Added sex shop in Northside
Added hotel in airport
Bug
Added lots of missing key check for apartments and houses (Thanks Hermenegild!)
Lily's plan event can only be triggered if she has met Rin (Thanks Avaren!)
Solved Anael casual outfit bug. She only has work outfit now. (Thanks Hermenegild!)
Solved Yatsumi missing image during bath event (Thanks LoganJ!)
Search and Wait functions can't be used when there is an objective now to prevent current event interruption (Thanks Avaren!)
Added missing images during Naomi's confession event (Thanks Knut Wuchtig!)
Corrected bug when buying outfits in shops and getting charged several time for the same outfit if clicked several times (Thanks Hermenegild!)
Corrected bug where player would not faint even when stamina was depleted (Thanks Hermenegild!)
Corrected salary incoherence for librarian jobs (Thanks Squark!)

v.0.19.2
More bug corrections, this should cover most of the bugs I received as feedback from you all, thanks again for your help to make this game bug free ! If you find a bug which you already reported but still present, please let me know again because now that I use the new bug interface, I might have failed to add it to the list so you'll have to let me know again. I tried to review all your comments but some might have escaped my sight, sorry about that.

This patch also add a nice small feature : A 100% gallery unlock button. Many of you requested it so I added it. Just click on the button and wait for the page to refresh. All replayable events as well as all their choices should be available. I didn't test all events to make sure all their choices are ok but it should cover 99% of the cases. There are still a few issues with the avatar display during replay, some might not appear (during the St Patrick event for example). I've not found the problem yet but I'll keep investigating this.

This is the last patch for this version. Any future bugs reported will be solved in v0.20 coming at the end of the month.

Check the changelog in game for more info.

Missing images added for students in swimsuit, school swimsuit and sport outfits during doll mode. Often noticed after a pact event with Lily involving a student.
Kumiko's event level 3 "Not here..." bug solved
Avatar overlap during 69 command solved
Girl not getting naked after ordered to during doll mode solved
Skills can no longer get higher than 100
Check the changelog in game for more info.