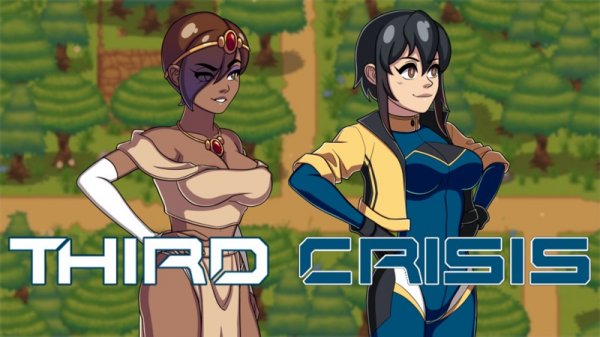 About game
Third Crisis is an adult tactical-RPG that follows the adventurer and hero known as Vibe. After a mission gone wrong, she’s forced to adjust to her new way of life in the lust-ridden town of Carceburg. Whether she gives in to the bliss of submission or uses her sexual appeal to her advantage on the battlefield is all up to you! As you delve deeper into Carceburg’s mysteries, you’ll come to uncover the secrets surrounding the crisis that saw humanity defeated and enslaved by the sinister organization Peitho.

Changelog – Third Crisis 0.24.0 Patron Release!
● Added new street-whore content that includes new animations.
● Added a new outfit for Jenna.
● Added another night to the dancing storyline.
● Added character art for Lumber Rat Squirter.
● Modified FPS limit and VSync options to allow you to set your FPS anywhere from
30fps to 240fps with a fancy slider.
● Fixed some out-of-bounds spots in the Inner Forest levels.
● Fixed timing of a song in the dancing minigame to be a lot more on-beat.

Changelog – Third Crisis 0.20.0 Patron Release!
Added CG replacement for the full nelson scenes between Rida and Mina.
– Added six new pinups featuring new art, and some unseen variants of CGs.
– Added four new characters to the character viewer in the gallery.
– Added a new sequence for the main story that introduces you to a new faction and new
characters.
– Added a new sequence for the Peitho route that takes you even deeper inside Peitho.
– Added lewd scenes for the dark alley in Carceburg.
– Added the ‘Roast and Spit’ minigame to the main menu with some extra goodies.

Version v0.15
Changelog
Added main story content that includes a new CG and h-scene to go with it! (0.15.0)- Added three new townhall events that feature a new character sprite, a new fullyanimated CG, and multiple new non-animated CG sets. (0.15.0)- Added a few interactions to people in Carceburg when naked.- Added new tileset for the abandoned house and fourth Floria flashback scene.- Added new replacement CG set to replace the old CGs of the Leath Circle Jerk scenefrom the prologue.- Added Vibrodash ability to Jenna in the flashbacks.- Modified loading screen backgrounds to be slightly animated (massive gameplaychange).- Modified Unity version to 2019.2.0f1, updated Playmaker and A*Pathfinding.- Modified character movement in combat for much faster movement speeds so combatcan be less sluggish.- Fixed Wildfire bad-end accidentally autosaving, causing the gameover continue buttonto loop you back to the end of the bad-end.- Fixed gameover screen causing your pause menu to be unopenable until the game isrestarted.- Fixed gear shop owner not noticing if your equipment is damaged.- Fixed bug that gets you stuck in the prostitution room after the last scene.- Fixed bug that causes you to not get your items back when (saving > closing game >loading) after items were taken away (Fiend Hub and Bartending).- Fixed bug that can cause some dialogues to break when they end.- Fixed Gear Shop owner not wanting to talk to Jenna when she has cum on her.- Fixed Oozer explosion effect disappearing too fast.- Fixed bug with barmixing recipebook text sometimes not showing on some resolutions.

Changelog Version: 0.7.5
- Added new holiday themed outfit with damage states that can only be obtained during the holiday event, but can be kept afterwards.
- Added new short mission that involves spreading holiday cheer to the town of Carceburg. Completing it grants you the holiday outfit.
- Added ability announcements that tell you what ability is causing a certain effect to happen when it happens.
- Added festive changes to the main menu during the holiday event.
- Modified combat balancing to lower time-to-kill issues regarding the Lumber Rat enemies.
- Fixed problem where energy wasn’t being properly taken away when doing a movement that should have taken two energy to complete.
- Fixed problem with skipping movements not properly updating character positions (by temporarily removing the ability to skip movements).
- Fixed visual bug that caused the hair of visitors in the townhall to disappear when approaching during their sex animation.
- Fixed bug that would sometimes cause the player to be unable to interact with anything unless they were below it.
- Fixed some problems with the job board not properly saving what missions it has available.
- Fixed issue where screen fade would sometimes never disappear.
- Fixed default AI behavior to properly use all of its actions before ending its turn (Grunts).