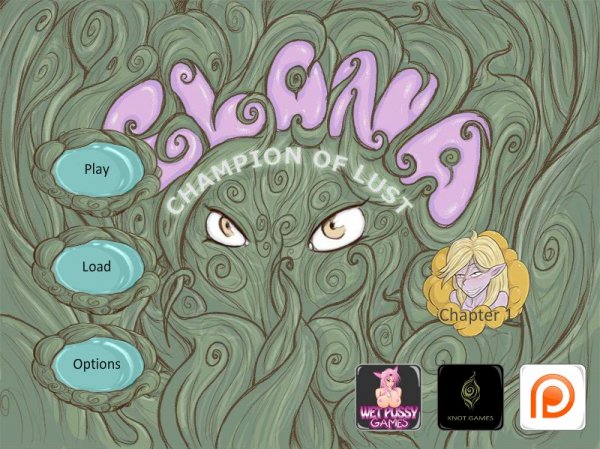 About this game::
Elana Champion of Lustis a game where you will have to bring back the natural order to an island where the people have lost and forgotten all about lust and passions.
You will control Elana, a fairy who has found the energy of lust and passion that was once removed from the people..

Chapter 3 1.5.5 Alpha
Changelog:
Added 14 New characters (2 of them are double) with their own rag dolls and avatar with facial expression for the Dystopia world.
· Added 61 Images (15 character Avatars, 14 Characters ragdolls, 32 Events).
· Added 3 Animations.
· Added around 175 new events. (+20.000 words that equals 60-80 book pages approx.).
· Added titles above the rag dolls of the characters with their name. The titles are shown when pressing Alt or by pointing them with the mouse.
· Background music adjusted. (Only two main themes now, more themes will be added in the future)
· Sound volume error when running the game fixed.
· Pathfinder mechanics (when Jane/Elana rag doll’s move across the areas) improved to adjust better to the background.
· Zone Camera adjusted (Player point view)
· Smooth transitions through the areas (now it fades in black from one to another). · · ·
· Background Blur when interacting with the characters.

NOTES:
-The world of dystopia can be completed until the last character from the palace. Still, the last event can be started, but the final mini-game and the closure of the world will be fully implemented in the next release together with the new content.

– Ailyn starting event when she asks Elana to do 3 quests, related to Doh’ly, Farms and Trate, two of them (Doh’ly and Farms) won’t disappear from the event despite you’ve completed them, still, once you’ve completed the three quests (and therefore, the whole event), the character will progress as intended and the event will be closed.

+We’ve fixed some minor issues of the first world, but there are some others (not really impactful on the game) that we have in mind to fix on the upcoming releases.

-When seeing a fade in black or a large “cinematic” event, try to not click on the screen, because that still gives the command to walk to Elana’s rag doll and makes her move, despite the map routes are not established, making Elana walk out of the roads and turning the fairy into a silly astronaut of the endless clouds.

Chapter 3
Changelog:
· WARNING: The music starts very loud and you have to adjust it in the options.
· Added save game feature (One single slot available for now)
· Options menu added in the game (there is some adjustments needed)
· Added a bar with the influence/progress of the world. It gets filled every time you “complete” a character.
· Added bars for the influence of the characters. Every time you influence a character, his/her bar will fill a little.
· Added reaction markers. Now when you perform an action on a characters, and the character gets influenced by it, he/she will appear naked and aroused (showing their true feelings). It doesn’t work (yet) with “double” characters like Lashy and Lodred, and the animation of this feature will be better and smoother in future. Also there are reaction markers ready for the bad reactions of the characters but are not implemented yet.
· Added area transition fade effect.
· Added the final event of the first world with about 20 images, one animation and a tutorial.
· Added and implemented the animations of Elana walking.
· Added the areas of the academy with 5 backgrounds.
· Added 5 avatars for characters with their facial expressions.
· Added the first lessons of the academy (right now it’s just an image slideshow and it repeats every time you enter the classrooms but in future it only will happen the first time and after it the lessons will appear according to the time of the game and as the way you managed them).
· Now after the final events of the first world, a path it’s opened to the dystopia world in the wrath area..
· The first time you walk to the dyistopia world an event will appear.
· Added the dystopia world empty with 5 backgrounds.

Changelog Alpha 1.9.9:
· Added the war against the demons. Once you have talked with innkeeper and he has asked you to help with the troops for the renegade war camp (he goes there after you see his last event of the tavern), you can provide those troops by paying for them in the training grounds of the castle (after you have completed the king and the queen events) but you can also save some money by finishing the octopus people events and the wild people events (if you take part for Red Scar) because they’ll help you joining the fight. Also, if you finish Morrow’s events, she’ll appear in the battle too. To start the war you’ll need to provide the amount of troops that the innkeeper is asking, but you’ll also have to watch the events of Jenara and Cliff in the renegade war camp.

· Added the demons area. Once the battle is done, Elana can go to the demons area if she has the stone that Scylla gives her during her chain of events (Reminder: To go under the sea, you have to find the stone of the water realm in the hot springs, and it will only appear there after you have seen Rala’s events in the forest and first Scylla’s event in the tower of the academy). Once inside the demons area, Elana will not be able to return to the island until she finds her way out.

· Overall, counting the battle against the demons, the demons area and a couple of events that will appear in the war camp, about 18 events have been added (we say 18 but since some point and click interactions have been added in the demons area, and you can have different answer depending on the moment, some of their events can’t count exactly as a singular event). We’ve added about 31 images (counting the 6 backgrounds) and 1 animation for these events.

· Now, after you complete Kaeryn’s events, you can go to the elven castle and find 5 events with 6 images and 1 animation. In the future, completing this events will change the behaviour of the elven woman (Note: there is an error displaying final images of the elven queen and the elven nobles but we aim to fix it by the gallery update we’ll upload tomorrow).

· Added the management of the followers of Elana. Now, after you buy the first upgrade of the tavern to manage it, and after you complete the events of the chaoticus anonymous in the side room of the church, some adepts of the church of Elana will go to the tavern and place their headquarters there. After that, you’ll be able to pick the completely influenced villagers from the different areas and send them to influence the other ones from the other areas. We have added 3 animations of foreplay for this part (with all hairs, colours and sizes of the villagers), there are 3 more sex scenes planned to be add, eventually.

· Jane events added in the church (her third event appears in the square). We have added 9 events for Jane with 14 images and 2 animations. Her events will appear as you advance in the game. More or less, every time you increase your global influence for a 10% (slightly more than a full area) and you complete one of the main check points of the game, you’ll be able to watch a new Jane event (the check points are Rala, Loola, the bards, the King and Queen, Scylla, the demons, Florala, the Archmage and the Elven Queen and wiseman. The elven Queen events are not yet linked to Jane’s event, but you can already watch them all). We know that, in order to find all Jane’s events, almost the whole game must be played again (In the final version of the chapter, the players will find all these Jane’s event as they advance through the story ) and this can be very tedious, specially when the game is so close to be finished. Because of this, we provide you with a cheat code that will allow you to watch the whole chain of Jane’s events, one after another: kgforstallos (press 0 in the map screen, delete the 0 that appears in the input box, type the code and press 0 again. Note: It can cause some minor problems with Jane’s questlog progression).

· Added 4 events for the Archmage with 4 images. After seeing the first Archmage’s events that were already in the game (Reminder: After you see the first event of the sheep in the farms you can go to the fairies village, and talk to Alaina, then, craft the spirit of envy, the chain of events of Alaina and envy will start during night. After Alaina meets the Archmage in the forest, you can find another Archmage event in the academy during night) you can find 2 more events of him in the farms during the night, then on in the academy during night and then one in his office any time of the day.

· Questlog updated.
· A lot of adjustments and bug fixes.

Alpha 1.8.2 updates:
· Added the events for the wild people with more or less 23 events and 19 images. The area have two possible endings but the rewards of the endings are not implemented yet.
· Added a minigame with 3 stages to move forward with the area of the wild people.
· To complete the area you’ll also need to visit the blacksmith (3-4 events), and have the magic amulet to collect ingredients (questlog explain it step by step).
· Added Morrow (sponsored by Morrow) with 5 events and 2 images. There is one image left but the part of the game when it should appear it’s not yet in the game. Her chain of events begin the second time you go to the east of the island. Two of the events trigger only by walking there, then there is a clickable event in the path to the east (same place where their first events triggers). And then you’ll have to complete the first stage of the minigame to be able to see her two last events.
· Questlog updated.