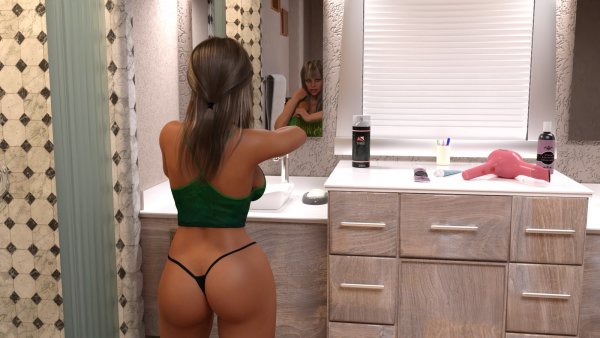 About game
Story Overview: Nathan was sent to jail for cyber crimes his best friend commited, and tried to blame on Nathan. After a year, his best friend was caught, and confessed to everything, allowing Nathan to return home. Welcome home.

v0.07.02 Public
There've been a few bugs that have interfered with saving, as well as a few other ods and ends. These issues should be resolved now.
v0.07.00
What’s new?
2 New ATs for Diane
New AT for Becky
New AT for Gina
New AT for Jesse
New Location: Boutique
New Location: Stripclub
New Job: Cashier
New Function: Temporary Reputation
New Function: Mood Modifiers
New Feature: Outfits
New Topics, Items, and Clothing
The intro scene at the beginning of the game
A new Animation
More Party/After Party Scenes
Lot’s of Bugfixes
Some UI touchups
What’s it mean?
2 New ATs for Diane – Due to $30 Patron support I was able to add two Diane AT’s this release.
New AT for Becky – Progress toward completion of her vanilla content continues
New AT for Gina – Progress toward completion of her Girlfriend content continues
New AT for Jesse – Progress toward completion of her vanilla content continues
New Location: Boutique – If you meet the requirements, you can now go downtown and pick yourself up something pretty.
New Location: Stripclub – Now if you’ve unlocked Lisa, you can visit her at her other job. Or just go for funsies.
New Job: Cashier – You can choose to work in the Boutique if you are so inclined to get a job in retail.
New Function: Temporary Reputation – Similar to daily maintenance actions with appearance (showering, ironing your clothes, ect) you can now earn temporary reputation modifiers. Some you get from the sex minigame. Some negative ones you might get for vandalism. These modifiers however last 3 days rather than just one. Currently character specific reputation modifiers are unique, but non-character specific modifiers are not. So you accrue a hefty rep penalty if you deal drugs every day, showing Charlie the time of her life will only get you so far.
New Function: Mood Modifiers – There are some actions that can alter the mental state of a character (drugs) in the game now, and those states can last a few hours. These states can affect how some scenes may playout.
New Feature: Outfits – You can now buy outfits for the girls at the Boutique, if your skills are high enough. Gifting these outfits can give you access to variations of scenes.
New Topics, Items, and Clothing – Lot and lots as usual.
The intro scene at the beginning of the game – About damn time!
A new Animation – Only one. Still working on Gina’s mingame animations. sorry :o
More Party/After Party Scenes – With mood modifiers added, there are some questionable choices you can make, to get some new party content, if you have access to certain pills. More to come :o
Lot’s of Bugfixes – And probably added some new bugs in the process.
Some UI touchups – nothing huge worth mentioning here.


Version 0.04.00
Changelog:
What’s new?
New/First AT’s for: Diane, Gina, Charlie, Becky, Lisa, Jay, Morgan, Tilley
New Locations: Bar / Charlies Bedroom
New Functions: Sex Mini-game(Charlie only for now), Query Function in the inventory, Multiple Save Slots, Primary Tags
New Topics: Way too many to list…We’re up to 110 transient topics currently
New Skills: Concentration, Communication, Demonstration
Lot’s of UI improvements
What’s it mean?
-New/First AT’s-
Diane’s new AT : Cosmopolitan
Gina’s new AT : with benefits
Charlie’s new AT : Casual Fling
Becky’s new AT : Influencer
Lisa’s first AT : Bar Temptress
Tilley’s first AT : Playful Tease
Jay’s first AT : Mostly A Girl
Morgan’s first AT : Dance Machine
-New Locations-
Bar : Can be unlocked by progressing to Over Affectionate Gina or Cosmopolitan Diane
Charlies Bedroom : Unlocks when you Transform Charlie to Casual Fling
-New Functions-
Sex Mini-game(Charlie only for now): More characters will get this type of scene as an option when thier AT’s allow for it.
Query Function in the inventory: You can now fill your empty hotbar with all the topics that have a specific tag with only a few clicks. Just empty your hotbar, and click on a topic to see the new button.
Multiple Save Slots: Now you can make bad decisions in three different flavors!
Primary Tags: Some tags have been labeled as Primary Tags. They visually look distinctive and are not hard to miss. Primary tags give a minor boost in conversations if the person you’re talking to is interested in that Primary tag. They also add all associated tags to the ban list if the primary tag is listed in a characters ban. So be mindful 🙂
-New Skills-
New skilltype (Passive): Passive skills do not gain bonus xp from traits. They only xp up when Nathan is involved in another person gaining xp. (Don’t try to grind…You can’t…just play the game, and they will level over time.)
Concentration: Mental focused passive skill that increases how much xp you grant for mental tags in conversations.
Communication: Social focused passive skill that increases how much xp you grant for social tags in conversations.
Demonstration: Physical focused passive skill that increases how much xp you grant for physical tags in conversations.

Version 0.02.00
Changelog:
What’s new?
The amount of ArcheTypes in the game has gone from 4 to 11.
Number of characters has also increased.
New Skill : Photography has been added
Tons of new actions
A new character
2 new Locations
2 new online shops
Tons of new topics & items
3 new animations (with another on the way)
New Inventory Mechanic: Wardrobe for stuff you don’t need to carry around with you.
Much more…