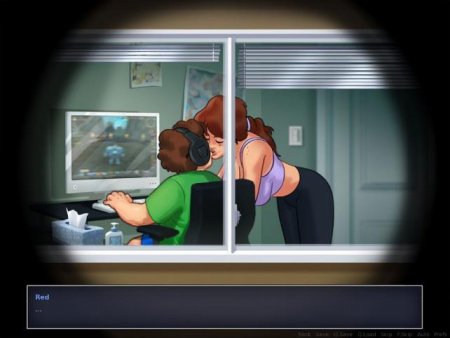 Mac Install Note: Extract to a writable folder (eg, drag/drop to your desktop)

Set in a small suburban town, a young man just entering college is struck by the death of his father. Mysterious circumstances surrounding the death are only the beginning of his adventures as he learns that his father was in debt to a group of shady criminals. Adding to the list of problems, our young hero needs to save enough money for his college semester and find a date for prom night!

v0.20.14 (Pre-tech – Part 4):
New Content:
Eight new animations spread over a variety of scenes.
Many of the scenes with first time and repeatable dialogue variants.
Bug Fixes:
Fixed issue in some dialogues where Jenny’s arms and face could vanish.
Removed Anon’s secret second penis from some scenes. >_>;;
Restore a small section of dialogue missing from Diane’s post-sex milking scene.

Changelog 0.20.12 (Pre-tech – Part 2):
New Content:
Six new animations (three with at least two variants).
Including the restoration of an older, fan-favourite scene.
Several new mini-events, to trigger new animations.
Sploosh’s ideal pizza party made a reality.
Improvements:
Rebuilt the milking minigame to improve fluid animation and performance.
Improved the transitions into and out of the milking minigame.
Allowed Diane to be milked during pregnancy and nursing for increased payouts.
Bug Fixes:
Removed long-disused variables from state machines, to reduce save sizes.
Fixed a case where Anon would not wave as scripted.
Added missing face for Chico and updated references to it.
Prevented Maria’s apartment intro triggering at night which would lead to missing art.
Tweaked activation of Diane’s first milk quest to avoid conflict with first conception attempt with Maria.
Fixed Diane’s costume changing in the middle of her breeding scene and smoothed transitions.
Ensured Jenny’s arms and face stay attached when handing over the photo from the attic.
Improved robustness of variant data seeding for the cookie jar.