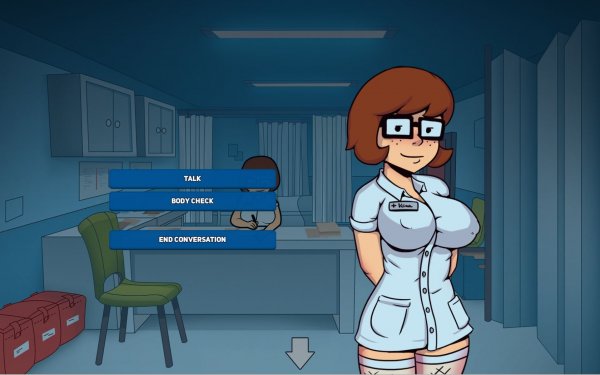 This Adult Game Presents:
You arrive at the summer Camp Pinewood, and realize you’re the only man here.
Camp full of beautiful girls. Your goal is to find out what’s happening in the camp and get laid

Version 2.5
Changelog:
Critical update for Camp Pinewood is ready.
Fixed: A huge amount of bugs
New: Chapters
This is the 1/2 reworking updates planned for this game.
Me, with help of my friends, fixed most of bugs by rewritng almost everything. The second update will include more missing content, which was cutted from the game in the development process and improve what we have today.
When it’s done, new content update will arrive. It’s probably gonna be 2-3 content update before release of the first version of Project Pinewood.

Now I'm still working on a content update for Camp Pinewood. It will bring more story and events and more improvement. Thank you for support! :)

v1.6
- Fixed a lot of script errors
- Added "Search" button to game
- Added some events (use search button on some locations)
- New place

Changelog 1.5:
Main changes:
Engine
First of all, I changed the engine from unity to renpy just to make this game work well even on a toaster.
It took most of my time. I spent weeks transferring it. And it turned out good I think.
New menus, better map, autosave, etc.
But also there will be new bugs. But I have a little help now, just to fix them.
Story
Then, I rebuild the initial story structure, added some scenes to make it more interesting, and changed direction to be able to do more with it.
For example, in next version, you choose side in the story, and stick with Madeline, punishing girls. As I said some older parts of story will be added in later, with a new ones, to make it more logical and exciting.
Characters
I tried to create new way to build relationship with character. Less grinding. But it now works only for 3 character. Frankie, Gwen and Jessica.
The main goal of this and next updates is to make all characters used in the story.
In 1.5 there are 3 new characters: Lola Bunny(Humanized), Judy(Original Character), Daphne

Changelog 0.8:
Finally, it took 10 days more to finish it. And I still will be here, until I fix critical bugs. So, if you found critical bug, send me mail to @yandex.com if you can. It’s easier for me to collect and analyze it. Thank you.
So, what do we have here? Completley reworked game. It took 4 month of paralell development with original version. Why, do you ask? This was a necessary step to add animations in 0.9-1.0 updates, android version release, no more “lua” code, and use this system in next game, I can’t wait to release it.
The main problem was caused by high memory load. CP have a lot of images, so it’s become really heavy to load with updates, specificly on a low-end devices. Crashes everywhere. Now they’re gone and it works even on android (tested on Motorola G5S device).
Surely, new version, new bugs, but I will fight them, as usual :p Not everything is done, though. Music still in work.


New feature:
“Try On”. Now you can ask girl to try on clothes you can find in the camp.
Some of them require a bonus code.
It will available after “Madeline” quest. To start “Madeline” quest you’ll need to talk to Frankie (make sure that you finished all Frankie quests and Military quest).
The feature is in the beta state, so there’s only 12 outfits yet.