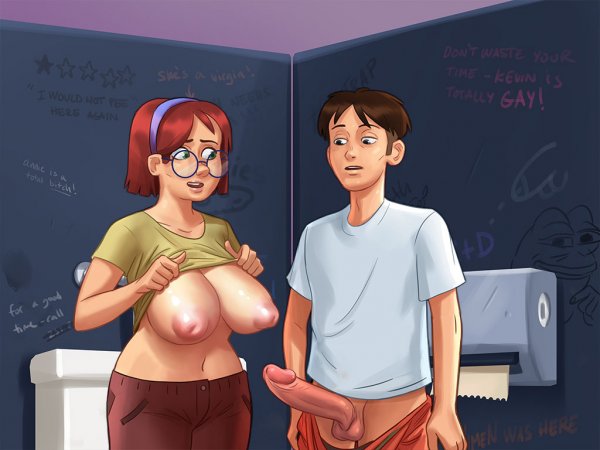 Description:
After his father died leaving his family, his death was suspicious and the police investigated the murder case. In addition, the father hanged a huge debt on the family from criminal personalities. So now the protagonist should take care of the family, as well as find people who killed his father, pay college and find a girl for the prom.

Quote:
The people, help the council for the pumping of power.
At what point or at what frequency do you need to press the key?
Or to get one level you need to make several approaches?
Really rested, I almost broke the clave. dash1

Change-Log v020.1::
– Improvements:
– Added a notice for when a save has been migrated, and what to expect as a result.
– Bug Fixes:
– Updated Cassie, Ross and Rump cookie jar scenes to use correct backgrounds.
– Fixed Mia and Jane’s cookie jar scenes to ensure they repeat correctly.
– Ensured achievement ping gets dismissed after viewing achievement list.
– Delayed ability to purchase beach house until after the main story intro.

Improved pizza delivery minigame experience.
More detailed backgrounds and evening variants for some existing locations, including: Beach, Glazies, Library, Planet Thiccness, Police station
Dimitri and Igor character art has been updated and expanded.
Dynamic backgrounds continue to roll out, providing more focused dialogue backgrounds.
New Features:
Support for scripted phone calls to add variety to character interactions.
Improvements:
Reworked phone to drastically reduce CPU usage and make parts translatable.
Reimplemented the pizza delivery minigame.
Optimised for consistent play-speed and smoother frame rates.
Made delivery more consistent; aim Anon’s head at the front door.
Art has also received a touch-up and been re-exported to reduce seams.
Tuned the dynamic background code to be quicker and less memory hungry.
Better support for perennial backgrounds (i.e. those without time variants).
Stat check notifications have been moved out of dialogue to a separate UI element.
Passed stat checks are now also shown, so branches are a bit more visible.
Cutscene transition standardisation continues, with many more updated.
ATM performance has been improved.
The shower rota roulette has been improved to offer more flexibility.
Bug Fixes:
Resolved crash in phone caused by having no active quests.
Enabled Consuela to carry twins, as always intended.
Restored erroneously unused Diane cutscene asset.
Fixed 100s of minor spelling and grammar issues.
Reordered layer to show posing for some Consumr dialogue that was previously obscured.
Removed possibility of taking Consuela to a locked church during her job hunt.
Renamed the regular beaver plushie to be an otter to match its depiction.
Corrected some of the flower names in Cupid.
Updated some dialogue where the player’s chosen name for Debbie or Jenny was not being respected.
Switched to using the correct background during Debbie’s day zero phone call.
Fixed player name alignment on report card.
Improved sleep prompt during Mia’s call for help quest.
Remedied the time of day in which Grace & Odette’s date takes place.
Fixed issue with daylight background being used at night during Jenny sex visits.
Taught Micoe to give accurate information about the location of Pregnax, Priya and the lab.
De-duplicated Jenny when she’d appear in the recovery room and at home after giving birth.
Prevented a segment of Eve’s dialogue triggering prematurely on weekends.
Given Debbie the ability to correctly identify a baby’s gender.
Fixed Anon’s internal virginity tracking so he can be honest in the game with Eve.
Updated a few instances where an incorrect blur was being used in the background.
Removed some disused/superseded assets.
Added some rails to Jenny’s ElectroClit quest to help avoid blocking other quests making use of Pink.
Fixed visual oddity occurring on entering the school for the first time.
Restricted access to Debbie’s panties while she’s in the room to prevent a conflict.
Resolved multiple blocking quest conflicts with Jenny mentoring Roxxy.
Removed an unneeded Bissette quest prompt that would play at the wrong time and without any background.
Fixed multiple visual and gameplay issues in Roxxy’s first study quest.
Prevented being able to jump start Diane’s breeding partner quest the night before.
Added confirm step to stat resets in order to give a second chance to people that don’t understand.
Improved school sneak quest rails to prevent accidental triggering of other quests.
Revisited pregnancy updates such that they play in sequence instead of only the first.
Fixed Annie’s button at her house to use correct dialogue.
Limited Richard and Lucy’s dialogue prior to taking delivery of Diane’s milk for continuity purposes.
Guarded against soft-lock when fooling around with Debbie instead of completing Diane’s route.
Prevented the search dialogue prompt in Jenny’s room playing if she is present.
Repositioned a Diane button that was trying to escape through the ceiling.
Removed a redundant dialogue option from Ivy’s button menu.
Restricted Lucy’s dialogue options about kids to when she’s in the daycare.
Removed the pregnancy minigame once insemination has already occurred.

Changelog 0.19.5
New Content:
Five additional cookie jar scenes.
A new quest featuring Consuela and the Rumps is now available.
Conseula can now be impregnated.
It’s now possible to access Rump Manor and it’s inhabitants.
The beach house has been extended with a kitchen.
A new recovery ward has been added to the hospital for women that have just given birth.
New minor characters: Chef Gamsay, Father Keeves, Melonia, Ricky and Thotbot.
Gameplay Touch-ups:
Improved pregnant bathroom visitation for Eve, Grace and Odette.
Tony’s pizzeria is now open in the evening, complete with new art.
Some old character buttons have been updated with the reworked visuals.
New Features:
Periodic autosaving has been replaced with a more checkpoint-like system.
The goal here is to provide more reliable and comprehensible backup saves.
The Debug Menu is now available to all users after acknowledging a disclaimer.
The loading screen now displays from which version a save originates.
Visual hints: Sepia for old but upgradable, and greyscale for unusable.
A warning is now displayed on loading a “recovered” save to expect odd behaviour.
A best effort attempt will be made to update older compatible saves on load so as to experience minimal disruption.
New method to display native language dialogue with subtitles when a character is speaking an unfamiliar language.
An experimental new system for generating background close-ups for dialogue.
Improvements:
Move character rename pop-up onto the new pop-up infrastructure.
Continue process of updating cutscene transitions.
Rework of season detection and related debug controls.
Experimental sex options screen with forward looking translatable interface is being trialled.

Changelog 0.19.1
Bug fixes:
Fixed a missing screen in the mall toilets.
Fixed Logger writing logging header to file when persistent.debug_log is disabled.
Fixed a crash when talking with Admiral Sploosh.
Fixed being locked inside the gym after yoga.
Fixed Odette disappearing during the evening.
Fixed an FSM action that wouldn’t trigger on Diane’s FSM.
Fixed hospital lobby background name.
Fixed soft lock in Erik’s house during the karaoke tryouts if you go in the mornings/afternoons.
Fixed soft lock in school when progressing Roxxy and Bissette at the same time.
Fixed the Orcette package monopolising the mailbox when loading a save made after its delivery.
Fixed the bank statement randomly showing up in the week with no interest, now Monday’s like clockwork.
Fixed Erik’s mailbox occasionally displaying as having mail when that wasn’t the case.
Moved the “clean auditorium” quest for dewitt from eve’s button to the park douches button.
Fixed the game being playable without extraction on MacOS.
Fixed more Diane wardrobe malfunctions.

New revamped Jenny story
Once a week, you get a bank report in the mail. It will sum up the money you have saved and interest gained over the week.
Birth Control pills added to the game.
– Available at the end of the Priya side quest
– Will set your pregnancy chance to 0
Take a pregnax to increase your percentage back up (take 2 to get to 40% chance, which is the maximum)
– Effect is permanent until pregnax is taken.
Added a ModManager static class to handle future mods of the game, with the possibility to enable/disable mods on the go.
Side note : once you start a game with a certain sets of mods enabled, you should not disable them if you want to keep using that save.
SayTextFilter class to handle multiple text filtering functions.
Remapping of the weightlifting minigame key (for now).
Remapping is done with the “set_key” function. It takes the following arguments:
– key_name (only the string “key_str” is valid at the moment)
– key_id (use the pygame variable for the key you want)
Remapping is only viable for the weightlifting minigame
Remapping can only be done via the console
– Example : set_key(“key_str”, pygame.K_p)
– refer to www.pygame.org/docs/ref/key.html for key codes.
Hidden attic scenes

Rework of the codebase:
Triggers are now in an init block as to not be saved in the save files.
Added pickling methods to our custom objects.
Moved achievements and cellphone assets to their own folders.
New screen actions implemented in:
– Annie’s House
– Beach
Rework of the music minigame. The notes highlight in red if you’ve missed them, and green if not.
There is also sound effects and a counter of fails displayed.
At 5 fails or more, the minigame will “fail”, and you’ll have to retry.
Sound effects are me, recording my guitar playing broken chords if you’re interested. You can use them however you want.

Bug Fixes:
The map screen now shows the location you’re going to on hovering that location. This is returning behaviour that disappeared in the 0.16 update.
Fixed save resetting bug (with the mysterious statue – piece 1)
Fixed time spent playing namespace issue that caused it to be counted multiple times
Fixed exception that could happen when winning the spin the bottle with MC.
Fixed “Skip First Day” option in the debug menu to work with jenny’s FSM and skip the hallway dialogue.
Fixed daylight scene happening in the evening when Diane’s barn has been finished.
Fixed day/night backgrounds issues in Diane’s barn.
Fixed overlap of milk item acquirement and pizzeria unlock popups.
Fixed Machine variables not reloading properly (Clyde and the dog quest)