Info: Misadventures of Agent Romanov is the first game of the Agents of Heels series, an Adult Interactive Fiction Visual Novel designed in Comic format.
We are aiming to combine the best of the narrative games (accurate descriptions and immersive dialogs where the user can choose between different paths), RPG’s (stat management, inventory, branches, etc.) and Comics (full-screen, beautiful renders, re-readable vignettes, etc.).

The main character for this volume is Agent Romanov, a lovely red-headed spy that takes part in risky missions with lots of action. You will have to struggle against a menacing alien force, an army from an evil corporation, inside conspiracies, and villains that won’t make your life easy.
In all those situations, you will have to decide which path you want to follow: Do you want to be the Hero that saves the day, or the Villain with unorthodox methods… that still saves the day?
- Additional Content: (HEROES & VILLAINS)

· STATS SYSTEM implemented. Game has now a Stat System which will allow you to customize your character and take decisions accordingly. Some already existing scenes have new stats values associated.

· One IDLE scene for every situation. Every repeatable action has now an “idle” scene which will pop-up if no further events have been found on that section.

· Action EVENTS become now EXCLUSIVE version. Now that the scenes are repeatable and no content is lost, events such as meeting Tim’s Granddaughter become Exclusive Version or higher.

· New Actions: Stretch and Flex at Home; Jog at the Park.

· Day2 (after infection) has been added. Romanov has finally a day to spare on her name. Use it wisely.

· A whole bunch of new scenes.

· A completely new set of portraits. Kate is a completely different character (in terms of attitude) than the rest so I decided to make her portraits from scratch.

· Complete rework on Scene Selection. There’s now a priority system that will select any available event or scene on a given situation.

· Character Swap. Dialogs now have the possibility of swapping the character telling the story into a secondary one.

· Stats GUI. A small popup will show the stats gained every time there is a change in that regard.

· Action Icons size increased to have better visibility over some areas

· SaveFiles from previous version should be pasted in the root folder of this one for them to work. 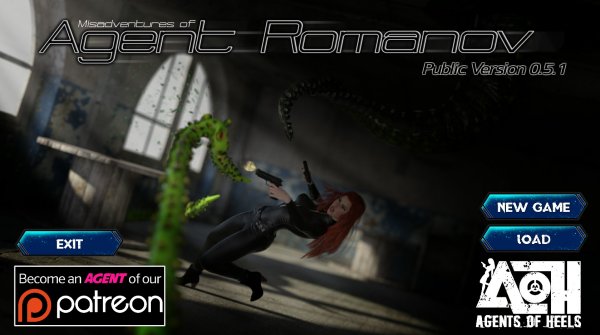